A HERITAGE OF TRUST

Established in 1978, we are a family owned, fully independent trust and corporate services provider. 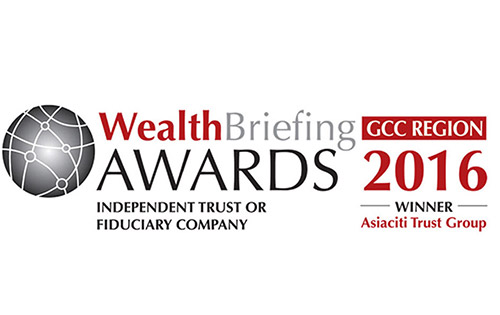 The Group has been crowned the Best Independent Trust or Fiduciary Company. The prestigious panel of judges noted how Asiaciti Trust Group takes the time to understand a client’s situation before providing a solution from its wide range of locations; and, also how the Group provides training and support to firms aiming to improve their knowledge of the region.

Asiaciti Trust Group’s Regional Director Laurence Black was also named Leading Individual (Advisor). This award recognises an individual who embodies qualities such as Laurence’s impressive contribution to the development of its employer’s business growth, his determination to raise the society’s profile and his approachable and willing to assist personality. Laurence also received a special Editor’s award for Outstanding Contribution to Wealth Management Thought Leadership.

The Guest of Honour HH Sheikh Mohammed Al Qassimi from the Sharjah Rulers Family did the honours of presenting the most prestigious awards of the evening.

The awards are testaments to the hard work that the team at Asiaciti Trust Group has put in over the last 12 months committing to deliver the highest level of services to its clients, and also propelled the Group towards its goal of being recognised as a leader in the MENA wealth structuring space.

ClearView Financial Media’s CEO, and Publisher of WealthBriefing, Stephen Harris, was first to extend his congratulations to all the winners. He said: “The firms who triumphed in these awards are all worthy winners, and I would like to extend my heartiest congratulations. These awards were judged solely on the basis of entrants’ submissions and their response to a number of specific questions, which had to be answered focusing on the client experience, not quantitative performance metrics. That is a unique, and I believe, compelling feature. These awards recognise the very best operators in the private client industry, with ‘independence’, ‘integrity’ and ‘genuine insight’ the watchwords of the judging process – such that the awards truly reflect excellence in wealth management. I am optimistic that these annual awards will become one of the brightest highlights in the wealth management calendar.”

This site uses cookies for analytical purposes, we do not collect or store any confidential information. By continuing to use our site you agree to our use of cookies.